It started out like any other night. Ben got an idea, and sat down with some paper, tape, scissors and stapler, and started creating. He does this all the time. What is funny to me is that sometimes the intricate things he tasks himself to build aren’t even very familiar things. Last week, he built a cash register out of cardboard, with a lever that kicked the drawer out. I do not think he’s ever even seen one of those, except on American Pickers.

This time, he was building something familiar, something that seems to be almost part of him. A motorcycle. He was smart about the sizing. He wanted to build something life-sized, so he chose to do a Pocket Bike (one of those little miniature things that looks like a small scale version of a regular motorcycle, but people ride them all hunched over with their knees up to their shoulders. I don’t understand the fad, but Ben knows that doing this size life-sized will make more sense when it’s made out of paper.). 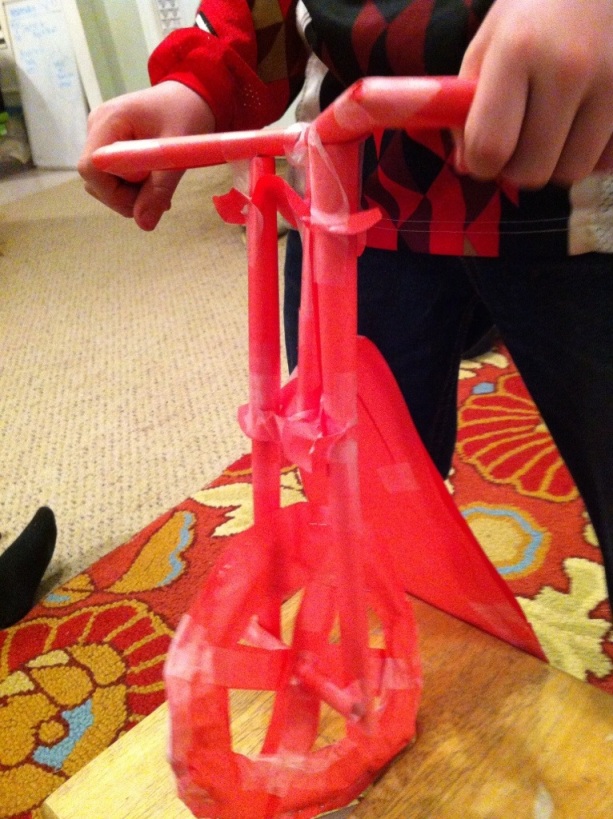 He’s got the handlebars, the neck, and the front tire done. There is tape showing everywhere, and that is half the fun. He is slapping this thing together as quickly as his mind can come up with the next angle. Get this though, the front tire spins!

I love it. He’s still got food on his face from dinner. He is still totally eight-years old. He just thinks in design and build and is a total gearhead.

Before bed, he added the brake lever and throttle shifter. Now, to add dimension to the back of the bike.

Is it any wonder I stay up late sometimes thinking of things to show him, artists to introduce him to, inventors to explore? This boys mind is constantly going, and I just feel the need to feed it with good things, like language and literature, amazing math, music and art, tremendous science and architecture, the histories of the greats… and motorcycle madness!

Let us go then, you and I - let us discuss. Cancel reply 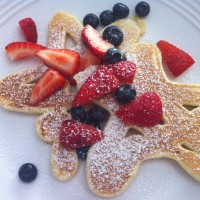 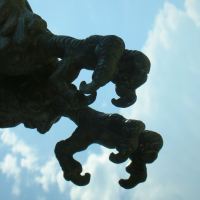 MY BOOK – Days of Soup and Holler

MY BOOK – Days of Soup and Holler

And it dawns on me. The lesson. These things happen sometimes when something someone says intrigues me so, that I want to ponder it, mull it over, hold it in my hand and carry it like a talisman until its wisdom breaks open for me.
Bean got some rather smashing Vans - with a theme of The Shining. He also has an old-school typewriter from a second hand store. “All work and no play makes Jack a dull boy!”
Olivia is my Unicorn Niece, and I am her Unicorn Aunt, and we do Unicorn Stuff!!
Tonight I get to start reading out loud from the Chronicles of Narnia at the Senior Living here in my town. I’m so excited I can barely stand it. I had totally meant to start with The Magician’s Nephew, which is the true start, but that’s the one book I couldn’t find. So we’ll start with The Lion, The Witch and The Wardrobe!!!
Happy Birthday, Alexandra Delaris Hannah - you loviest of lovelies! Have a luscious, delicious, decadent year!
Bean had friends over for New Year’s this year - I forgot to post the pictures earlier. One of his friends had to leave earlier, but Josh and Marley stayed until Midnight and made all the noise they could with these noisemakers. This is them trying to take selfies where everyone’s eyes are open at the same time. They couldn’t stop cracking up.

The Stuff that Goes on in my Head 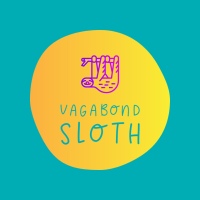 No Talent For Certainty

How to feel better again
Home

Advocate & Coach for mama's who have a lot on their plate. If that's you, I promise it's going to be okay. Let’s connect.

Born to Write, On a Mission to Inspire

For those who love to wander but find it hard to leave their tree.

It’s All Fun and Parenting!

I give advice for parenting, budgeting, health and cooking. I have hacks, DIYs, fun ideas for families and help with self love!

The blog of author Betsy Kerekes

From soul to soul

I write about Desire. Sex. Longing. Pain. Darkness. All of it.

Live to Write - Write to Live

We live to write and write to live ... professional writers talk about the craft and business of writing